Klaipeda is the oldest town in Lithuania beginning in 13th century. It had a colourful history as the town was once part of Prussia, Germany, France, Sweden and Soviets. Now Klaipeda is the cultural and economical capital of the Western Lithuania with around 150,000 people.

Germany had made a great influence to the town. Its unique feature is the German built half-timbered houses and the rectangular layout of the streets where once bakers, shoemakers, blacksmiths used to live and ply their trades.
The heart of the old town is the Theatre Square with a Theatre building, where Richard Wagener used to conduct in his young days. In front of the Theatre building stands a demure sculpture of Annchen from Tharau built in remembrance of the Memel born German poet Simon Dach.

Klaipeda is also famous for white sand beaches, parks and wild forests. Even the Prussian Queen Louise, whose family lived in Klaipeda in 1807, had a favourite relaxing retreat – the Klaipeda University Botanical gardens. Klaipeda is great for recreation as there are many tracks for walking and cycling. A modern yachting club for sailing, diving and fishing clubs. Families always admire an Aquarium and a Dolphinarium, hosting shows of dolphins and sea lions.

Most importantly Klaipeda is the Lithuanian gateway to the world. As the only ice-free port, it was the main trading channel between the Eastern and Western Europe even in the 18th century. Klaipeda is an attractive cruising destination. The summer months are filled with festivals starting with Street Music Day in May. The biggest draw has been the international Jazz Festival, which started right after Lithuanian independence. There is also the flamboyant five-day Sea Festival with carnivals, street fairs and music everywhere.

Klaipeda of today is truly a vibrant, bohemian city with a marine spirit. 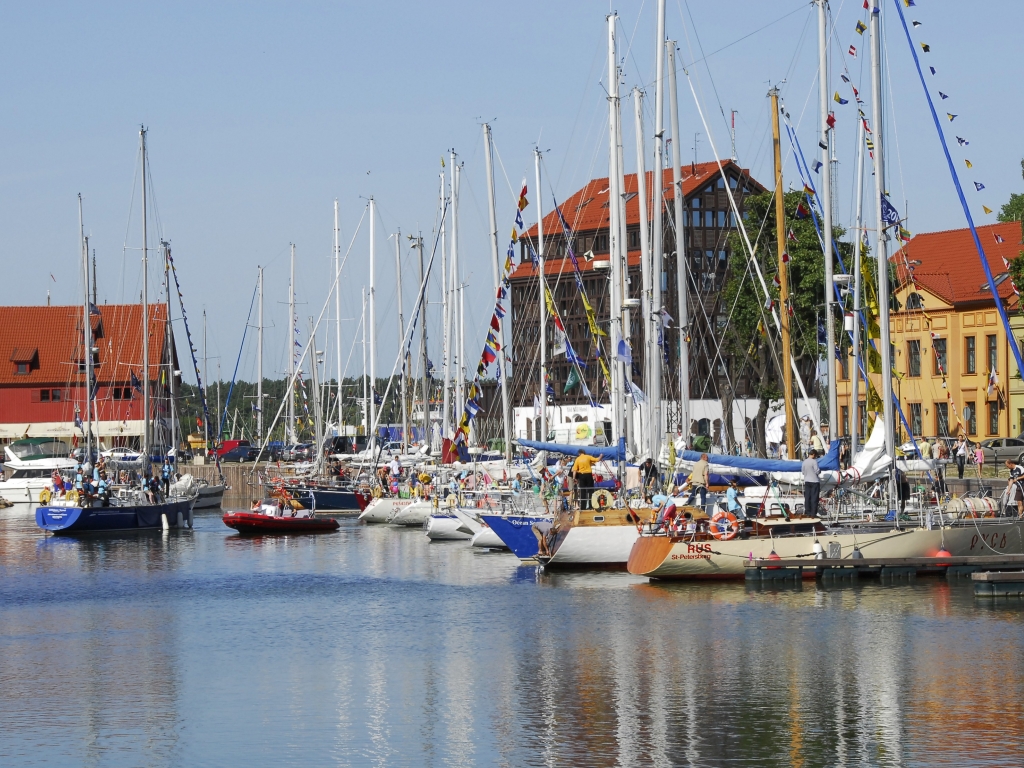 Blacksmith Museum (Kalvystės Muziejus)
Established in 1993 and worth a quick look around. The city’s singularly peculiar Blacksmith Museum provides both a glimpse inside the world of the smithy as well as a tantalising look into the rich ethnic and cultural past of the region.

Displays include exhibits showing the many skills involved in the craft, with a large knot of miscellaneous crosses upstairs. In the back yard are original crosses displaying a multitude of local languages, several of them now extinct. The small building at the back of the complex is a working blacksmith’s workshop, where demonstrations of the craft are given.

Address: Šaltkalvių st. 2
Castle Museum (Pilies Muziejus)
First mentioned in 1252, the city’s castle stood on this site in its many guises for centuries until it was finally dismantled towards the end of the 19th century.

The museum, located inside two separate underground sections of what remains of the structure illustrates both the history of the building and the city in general with the help of a galaxy of display cases and models in medieval costumes. Of particular interest are a series of gorgeous paintings of the castle and the city in its heyday, photos from WWII and the Soviet reconstruction of the city. Outside, a section of the castle foundations has been revealed.

The aquarium, housed in a reconstructed fort, features a big central pool surrounded by tanks of penguins and a number of unusual fish and other aquatic displays. Outside during the summer you can see shows featuring a big sea lion that plays with balls, hoops and members of the audience. Highly recommended for families with children! The museum is located at the tip of the Curonian Spit. To get there take the ferry and follow the long path north along the edge of the water.

Address: Smiltynės st. 3
Museum 39/45
Located inside the complex of Castle museum, this museum represents WWII in Klaipėda city and region.

In 1939 Germany ultimately demanded that Klaipeda Region must be handed over to it. Visitors of the museum, for the first time in Lithuania, can see and read documents certifying this event.

Museum exposition presents weapons used during WWII, house hold items such as aluminium cup of former Lithuanian Foreign Minister Juozas Urbsys, or child’s doll, which accompanied its owner to exile in Siberia and after 1953 came back to Lithuania.

Klaipeda University Botanical Garden (Klaipėdos Universiteto Botanikos Sodas)
History shows that the monarchs of the Prussian and Russian empires Frederick Wilhelm III and Alexander I, whose territories met a few kilometers from Klaipeda, came together to discuss international affairs on this very spot in a valley by the Dane river way back in 1802.

An exceedingly rare royal occurrence, the event was commemorated as a tribute to the friendship the meeting spawned by the founding of a park which is in the hands of the city’s university. Covering almost 10 hectares, the park comprises of a collection of around 3,000 annual and perennial species organised into several groups, as well as large rock garden.

Address: Kretingos st. 92
M. Mazvydas Sculptures Park (M. Mažvydo Skulptūrų Parkas)
On the site of the city’s second main cemetery that opened in 1820 and which was destroyed by the Soviets in 1977.
The 10-hectare site contains around 180 works of art by 54 sculptors as well as several memorials and a former chapel that now functions as a Russian Orthodox church. The park is a popular place for strolling all year around.
Address: K. Donelaičio st. 6

This website uses cookies to improve your experience while you navigate through the website. Out of these, the cookies that are categorized as necessary are stored on your browser as they are essential for the working of basic functionalities of the website. We also use third-party cookies that help us analyze and understand how you use this website. These cookies will be stored in your browser only with your consent. You also have the option to opt-out of these cookies. But opting out of some of these cookies may affect your browsing experience.
Necessary Always Enabled
Necessary cookies are absolutely essential for the website to function properly. This category only includes cookies that ensures basic functionalities and security features of the website. These cookies do not store any personal information.
Non-necessary
Any cookies that may not be particularly necessary for the website to function and is used specifically to collect user personal data via analytics, ads, other embedded contents are termed as non-necessary cookies. It is mandatory to procure user consent prior to running these cookies on your website.
SAVE & ACCEPT